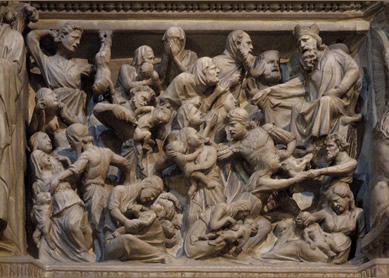 In a parable seemingly written for our present historical moment, this week’s reading from Matthew dynamites any and all claims made by any and all people on social, moral, economic, civic, legal, or cultural dominance. Pharisees and Herodians—the would-be government of Jerusalem—want to take control away from Caesar’s sitting government, itself a religion organized around a self-proclaimed “Son of God.” Each party wants control of the Temple-Palace complex. That last bit is critical. The Temple and the Palace were a single institution in the ancient world. That’s why the Pharisees dragged the Herodians into the debate. In Matthew, this debate is not between church and state, as is often and cheaply claimed, but between two human religious factions, Jews and Gentiles, each self-organized around the lust for power.

May the Lord bless your Thanksgiving table with gratitude for his bounty, heaped generously upon our unkindness toward one another, and may he have mercy upon us.

I Feel You by Kevin MacLeod
Link: https://incompetech.filmmusic.io/song/3894-i-feel-you
License: http://creativecommons.org/licenses/by/4.0/